Join your Committee for this summer’s social event.  The Kennet & Avon Canal Trust’s narrowboat Jubilee will be cruising west from Newbury Wharf to just beyond Benham Lock before returning.  Boarding is from 5:15pm for a prompt departure and the cruise will finish at approx. 9:00pm; there is the option for passengers to stretch their legs at Benham Lock for about 20 minutes while the boat is turned.  The ticket price of £17.50 includes a mug of tea or coffee and a selection of sandwiches, cakes etc.; further drinks including beer and wine may be purchased at the bar on the boat – card payments preferred.  Booking details and form on the slip with this newsletter.

Admission is free for members or £2.50 for non-members. Visitors are most welcome.

This talk will cover agriculture over the period from after the end of World War 1 up to the present day, with some references to local agriculture; and will therefore cover the period that most people are able to relate to.  It will include references to the foundation of the industry, and a review of the future of the industry, with challenges from global warming and changing dietary preferences.

Newbury Society chairman David Peacock will be reviewing the past year; talking about Newbury today, some of its attractions, and the range of challenges it faces.

A History of Newbury’s Breweries, from the earliest records to the final demise of the industry in the town. A lavishly illustrated talk piecing together the fascinating and often complicated history of the descent of these businesses large and small.  For many years Phil, an enthusiastic local historian, has been uncovering all there is to know about the large number of pubs and breweries that once seemed to fill the town.  Study of the existing pubs also gives him the opportunity for some enjoyable field work!

Long-standing former committee member of the Newbury Society, Elke Holden-Bell, died at her home in Speen on April 6.

Elke was married to the late Newbury Society chairman Jeremy Holden-Bell, who died in 2017.  She was born in 1935 as Elke Carstensen and spent her childhood in Hamburg, which suffered badly during the war; and life remained difficult once the war had ended.  In spite of this she went to university in Hamburg, developed her interest in art history, and went on to live in several European countries.

She met Jeremy in Bulgaria and they were married in November 1970 at Richmond, while Jeremy was working for Bayer at Kew.  When the company moved to Newbury in the early 1980s they moved with it, settling at Speen Lodge Court, off Speen Lane.

They quickly became involved in many aspects of local life, and Elke became the public relations officer for the Newbury Society, expanding the role in the 1990s to become membership secretary, while Jeremy became treasurer and vice-chairman.  She was closely involved in social events, and continued to support Jeremy after he became the Society’s chairman in 2009.

The couple were also active members of the West Berkshire Conservative Association, and supporters of the Newbury Spring Festival.  They travelled extensively across Europe, including regular visits to Germany.  Elke, as secretary of the Speen parochial church council, was also among the group which successfully fought against the closure of Speen church.

After Jeremy’s death in December 2017, Elke continued to live in Speen Lodge Court, with increasing support, and (in spite of some stays in hospital), it was there she died.   The funeral service was at Speen church on April 22, and she was buried alongside Jeremy in Speen churchyard.

A government minister has given the go-ahead for the 1,000+ housing development at Sandleford, overturning objections from West Berkshire Council.

The development, south of Monks Lane, across from the A339 towards the Andover Road, has been on the cards for many years.  West Berkshire Council officially identified the site as suitable for up to 2,000 houses back in July 2012; it was not opposed to the development in principle, but had rejected the latest set of plans from the developers, Bloor Homes and Sandleford Farm Partnership.

Local residents raised many objections, and fought the plans with a campaign called “Say No to Sandleford.”  The site gained some national media attention mainly because it features in Richard Adams’ “Watership Down.”

The decision on May 6 to allow the development came from Stuart Andrew, Minister of State for Housing, following the public inquiry before a planning inspector in May last year.

WBC’s executive member for Planning, Transport and Countryside Richard Somner said “We are disappointed with the outcome of the appeal inquiry for Sandleford Park, which is an allocated strategic development site.”

There are still many details about the development to be finalised in future applications.  “We will now encourage and seek to engage in pre-application discussions positively and pro-actively with the appellants,” says a statement from the council, adding that the development will eventually provide up to 1,080 new homes including affordable housing, with expansion land for Park House school and open space, including a country park.

We would welcome members’ views.

Talk about the role of the High Sheriff of Berkshire

The High Sheriff of Berkshire is an unpaid role, appointed by the Queen each year to carry out ceremonial, charitable and community functions. 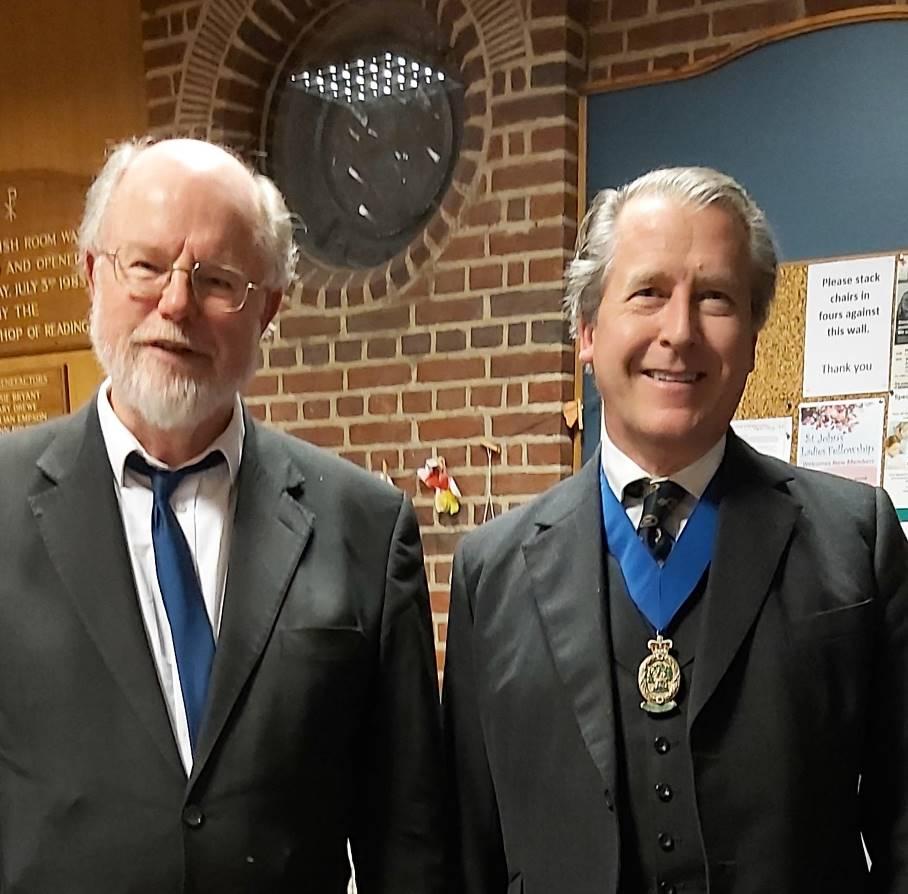 The role was described at the February meeting of the Newbury Society by Willie Hartley-Russell, High Sheriff for 2021-22, who is the eighth member of his family to have been High Sheriff, starting in the 16th century.

The role relates to the legal system in each county, and includes hosting visiting judges, a role Mr Hartley-Russell said had been carried out more extensively by his father.  Among other events, Berkshire schools are also invited to take part in mock trials, to give them knowledge of the practical workings of the legal system.

The Sheriffs (for England and Wales, but not Scotland) are appointed by the Queen using a bodkin to prick holes against each name on a scroll.  On one occasion, Mr Hartley-Russell asked the queen whether she personally “pricked” every name, and she assured him that she did; which gave him an indication of the kind of monarch she is.

As part of his role, the High Sheriff also visits prisons, and the probation service.  He was invited to speak to the Newbury Society by Garry Poulson, who has worked with him through the High Sheriff’s links with the voluntary sector throughout Berkshire.

Mr Hartley-Russell also talked at length about his family’s connections with the almshouses Donnington Hospital, founded in the 1390s.  These are among the oldest almshouses in the country.  He is also a Trustee of The Almshouse Association, a national organisation.

Following our talk on the Boxford Mosaic in March, members might like to know that the Boxford Heritage Centre will be opening to the public from 2pm to 5pm on Saturday June 4 and then on the first Sunday of the month for the rest of the year: July 3, Aug. 7, Sept. 4, Oct. 2, Nov. 6 and Dec. 4.  The Heritage Centre can be found at the end of Boxford churchyard on Leckhampstead Road, opposite School Lane.

Display items include a new large photo of the Roman mosaic (courtesy of David Shepherd) and finds from the site, and there will be a slide show of the 2019 excavations including some of the late Anthony Beeson’s reconstructions of the missing parts of the mosaic.

Further details are online at www.boxford.org.uk/category/heritage-centre

The latest blue plaque was unveiled at Wash Common on May 5th to disability rights campaigner Doris Page.

In 1955, Doris contracted polio – a disease which affects breathing.  The response at the time was to confine patients to hospital, inside an “iron lung” which would breathe for them.  With the support of her husband Ken, Doris fought to return home to 39 Essex Street and regain a more independent life.

From her bed she started campaigning, first for people affected by polio and then more broadly for the necessary infrastructure to enable disabled people to lead a viable home life, partly as one of the founder members of the charity “Independence at Home”.

She took a postal course in journalism and started to write on disabled issues for the local and national press under the pen-name “Ann Armstrong”, using specialist equipment which made writing possible for her.  She founded and from 1963 to 1968 edited a magazine, named with reference to the space age, as the “Responaut”.  In 1968 she was awarded an MBE for her work.  She wrote two books, “Patient’s Prospect” and “Breath of Life”, which were serialised on BBC Woman’s Hour.

The plaque is the latest in the series organised by Newbury Town Council and supported by the Newbury Society, and more information can be found on the websites of both organisations. 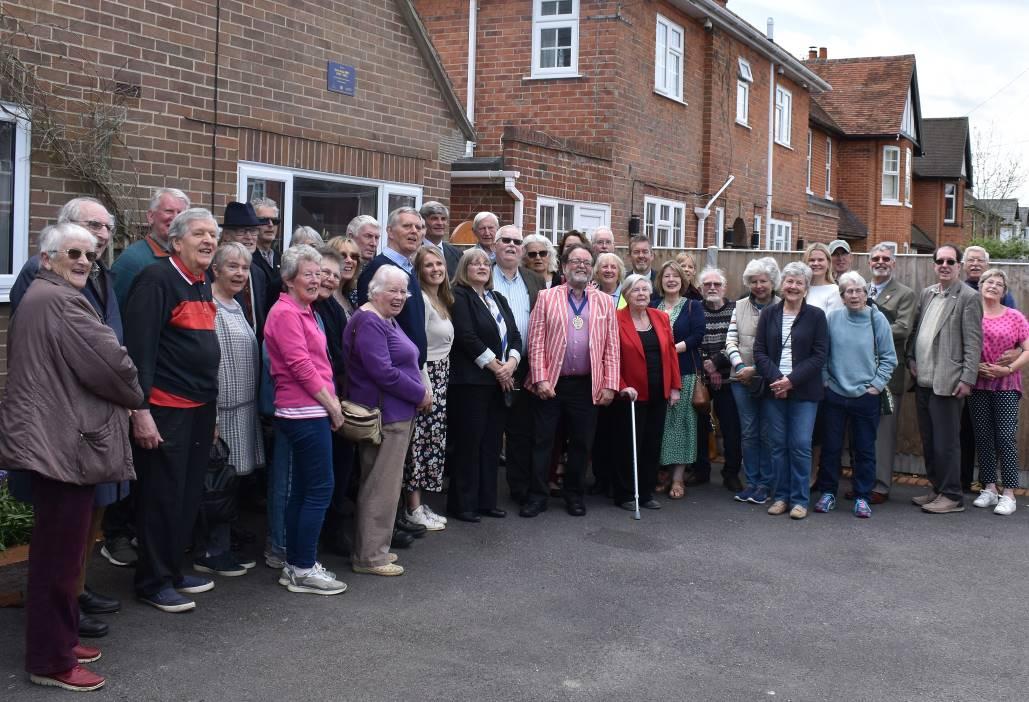 A large group attended the unveiling, including many members of Doris Page’s family, Anthony Pick (who chairs the town council’s Heritage Working Group), and Dave Stubbs from Wash Common, who proposed Doris Page for the plaque and did much to co-ordinate the event.  Newbury’s MP Laura Farris, Newbury and West Berkshire councillors, representatives from St. George’s Church, local residents and others who had known Doris were present.

The plaque was unveiled by Newbury’s deputy mayor Gary Norman. There were several speeches, with lively accounts of her life from Dave Stubbs and Doris’s son, and a reception at the Bowlers Arms followed.  A statement from the town council read “The Town Council is very grateful to Mr and Mrs Joliffe [who now live in the house], to the Newbury Society for generously contributing £100 to the cost of the plaque, and to Dave Stubbs for advising us on Doris’s life and achievements”.